NASA’s Curiosity Mars rover has reached an area where orbital images had piqued researchers’ interest in patches of ground with striations all oriented in a similar direction.

A close-up look at some of the striations from the rover’s Navigation Camera gains extra drama by including Mount Sharp in the background. The lower slopes of that layered mountain are the mission’s long-term science destination. The image is online at:

The foreground rocks are in an outcrop called “Junda,” which the rover passed during a drive of 328 feet (100 meters) on Feb. 19. It paused during the drive to take the component images of the scene, then finished the day’s drive. A location still ahead, called “Kimberley,” where researchers plan to suspend driving for a period of science investigations, also features ground with striations.

Martian Landscape With Rock Rows and Mount Sharp. This landscape scene photographed by NASA’s Curiosity Mars rover shows rows of rocks in the foreground and Mount Sharp on the horizon. Image credit: NASA/JPL-Caltech

NASA’s Mars Science Laboratory Project is using Curiosity to assess ancient habitable environments and major changes in Martian environmental conditions. JPL, a division of the California Institute of Technology in Pasadena, built the rover and manages the project for NASA’s Science Mission Directorate in Washington. 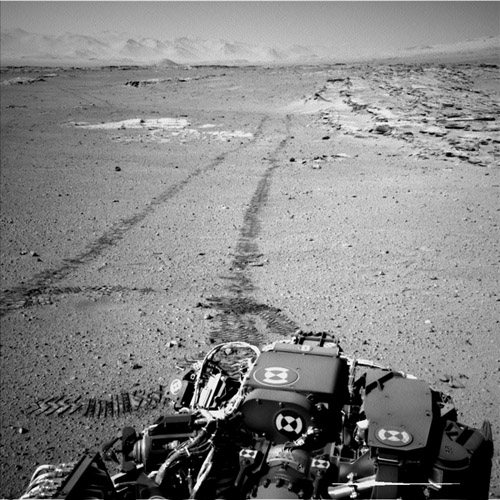 Curiosity’s View Back After Passing ‘Junda’ Striations. NASA’s Curiosity Mars rover used the Navigation Camera (Navcam) on its mast for this look back after finishing a drive of 328 feet (100 meters) on the 548th Martian day, or sol, of the rover’s work on Mars (Feb. 19, 2014). Image credit: NASA/JPL-Caltech